I recently presented a webinar with DevOps.com about the behaviors we see in DevOps teams who represent the leading edge of Incident Management. Using the Incident Management Lifecycle as a jumping off point, we explored 10 tips for DevOps teams that nest into each of the 5 phases of an incident’s lifecycle. Depending on a teams’ relative maturity, these ideas may represent anything from a starry eyed daydream to an example of your normal operating practice.

A recording of the presentation, polls, and Q&A can be viewed here. I’ll explore the topics discussed further below.

As we’ve discussed before, we like to break up conversations around incident management into five phases. This framework gives us a common language to discuss improvements that teams can adopt to make on-call suck less.

Most people immediately recognize the first 3 phases, that’s certainly where all the action and adventure lives in on-call. That said, the last two are the most important for a team when reducing time-to-resolution is their focus. Analysis and Readiness is where teams focus on learning and enacting improvements. Without significant, ongoing focus on these phases, teams will rarely manage to get out of a break/fix cycle.

Iteration. I cannot overstate that the best thing you can do to get better at Incident Management is to keep trying to get better at Incident Management. In most environments, the reality of on-call is a kind of foggy staggering between outages. A large event will occur, after which teams will scurry around trying to implement changes to Detection, Response, Remediation, and systems all at once. A harried two weeks will come to a close with many ideas half implemented, then everyone returns to their day job of programming or systems. No further work is performed to get things better until the next big outage.

This is not a recipe for success. DevOps in Incident Management creates collaboration around on-call responsibilities, leading to less pain and alert fatigue.

Every iteration, every week, some percentage of the roadmap must be devoted to ongoing improvements to the systems, process, and people behind your on-call rotations.

While a blended approach gives far more insight and intelligence about what’s going on, teams must be wary of alert fatigue from too many things going beep.

While the aggregate network throughput on the outside interface of your load balancer is an interesting metric, it means little compared to midday revenue. Why has engineering moved so far away from business outcomes? The best teams use the businesses’ core metrics as a means to detect application health, and respond in kind to changes or variance beyond expected norms.

So much has been said about this, you’d think we could all move on. However, the number one thing I still hear in casual conversations is how alert storms, and un-actionable nonsense is ruining a teams’ morale.

Actionability means both that the alert requires action (instead of being purely informational), and that the alert has been delivered to someone with the permission and ability to perform said action.

At any level of adoption, ChatOps is a game changer for teams. Particularly as teams move to fully integrated ChatOps environments, the benefits to all phases of the lifecycle are manifested. At the most basic level of adoption, ChatOps creates a common, time-indexed and searchable record of the firefight. These transcripts are useful for others joining the action to get up to speed, and in the Analysis phase of after-action discussions.

An interesting poll result from the webinar shows that, while adoption is growing, ChatOps remains an opportunity for a lot of teams. 25% of respondents indicated no use of ChatOps in their teams. 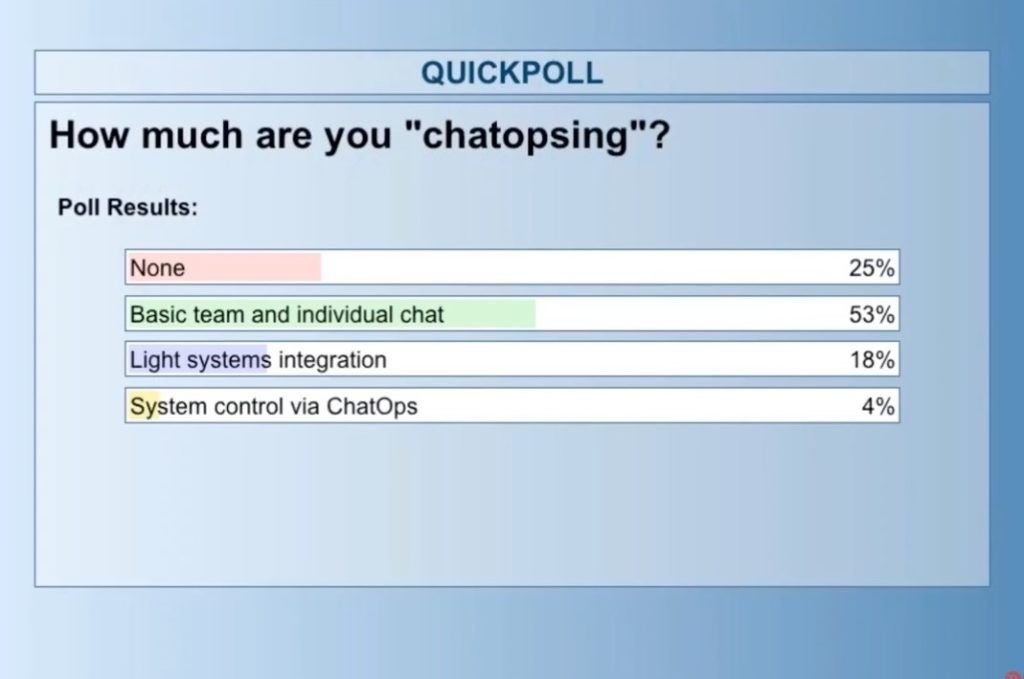 Tip #5 Runbooks are central to remediation

As engineering teams continue to adopt complex technology systems, helping incident responders understand the what of a system becomes a critical area of focus. Getting paged for the Nth microservice created this week is great… if it’s your service. Cross training for every application is hardly practical, so the best teams rely on runbooks as a bridge to establish context for on-call teams.

The best runbooks have several characteristics:

It’s tough to call this a tip given the work involved for any team to move from older methods of maintaining infrastructure. Adopting configuration or infrastructure as code represents a multi-year project for nearly any established business.

The difficulty of adopting this approach aside, teams who operate infrastructure in the same workstream as developing code are a breed apart. Consolidated workstreams create a step function in efficiency and adaptability for any DevOps team dealing with outages. Full transparency into all state changes in systems leads to quicker diagnosis, and the ease with which these teams actualize changes are doubly impactful to remediation efforts.

If, like me, you’re tired of hearing about “data driven” things, you can mentally rewrite this tip title to read “Rigorous methodology drives investigation”. The best teams keep after-action analysis focused on clean observation, testable hypothesis, clear success criteria, and an iterative approach to learning. At their best, these approaches look more like the Scientific Method than anything else. 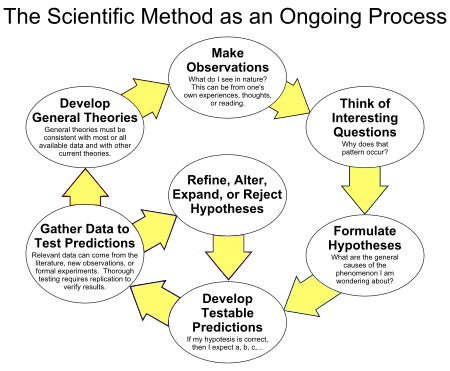 Moreover, these teams discuss the impact of cognitive biases on their work. Objectivity, rigor, and defensible analysis rule the day. DevOps ideals such as continuous improvement feed well into Incident Management preparation.

Much like #3 above, this advice almost seems like piling on - who has been at a conference in the past year where at least one “blameless postmortem” talk was given? The number of people advocating it though, is an indication of how utterly required it is for any on-call team. Blameful culture cripples responders as they are less likely to act in the moment, and more likely to hide information after the fact.

The best teams create a culture where responders are empowered to act, expected to act, and rewarded for taking smart action. A postmortem focused on learning as much as possible from an event is one way to help foster a culture of action in your team.

The most objective, learning-focused, rigorous Analysis phase imaginable is worth little if no action is taken. Far too often teams go through the motions of after-action discussion, then lose track of the ideas, lose time to implement, or lose focus on those ideas through lack of leadership. 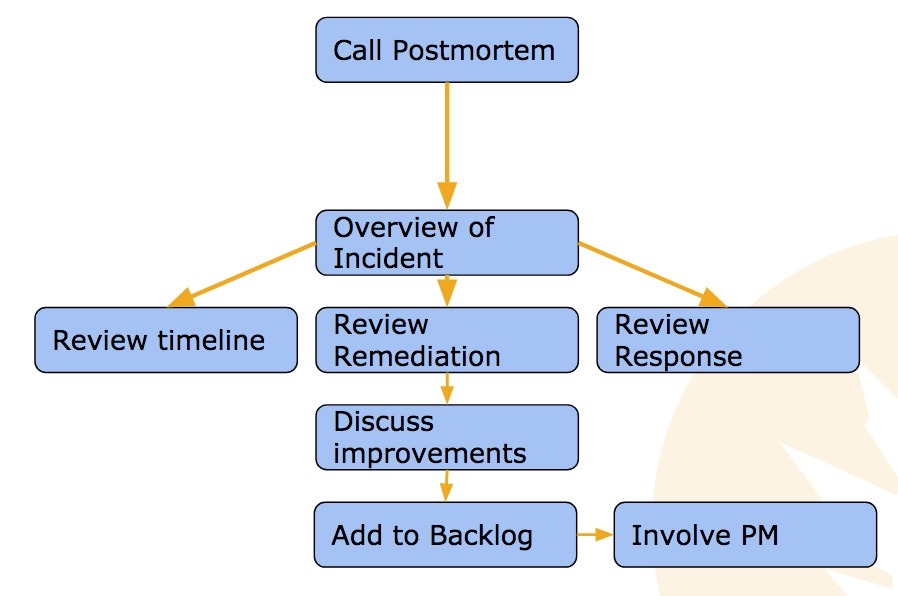 Improvements to Incident Management are as important, less important, or equally important as feature requests. Who knows which? Keeping Product Managers involved in your readiness will enable clear discussions about the tradeoffs with other work being planned. Adding those improvements to the same workstreams will not ensure they are actioned, but it does help you create a running backlog of desired improvements that can be added to longer term roadmap planning.

One of the best questions from the Q&A time at this event was (paraphrased) “How can you help a team deal with the unknown or unexpected?”. This is the heart of really everything we do. Things are going to break. They are probably going to break badly. They will break in a way you have only vaguely imagined… how can we be ready for the unknown?

The short answer is: you can’t! What you can (and should) do instead is focus on setting a group of smart people up for success. Give them tools, give them clear roles and organization, and let them be smart. They’ll figure it out, as long as they aren’t also trying to figure out organization and communication at the same time.

Any one of these ideas may represent months of work for a team. None of them are going to solve all your on-call problems the first time you try it. By adopting a continuous improvement mindset, Incident Management teams can implement small changes frequently, and start walking the path to being a highly effective team. These ideas and more are explored in the new ebook The Dev and Ops Guide to Incident Management, which you can download here.

Sign up for your own 14-day free trial to see how VictorOps incorporates these tips into creating highly effective DevOps incident management teams.